I have a long-running interest – almost a “love affair” – with the Lockheed Blackbird Family of High-speed (Mach 3+), High-altitude (over 80,000 feet) reconnaissance aircraft. As best I can remember, I first saw a Blackbird – the SR-71 – in 1972 while I was stationed at Kadena Air Base on the island of Okinawa, Japan. I was the aircraft commander on a KC-135A crew temporarily assigned there during the Vietnam era.

The Blackbirds stayed in their hangars until they were ready to launch and on landing taxied back into their hangars. We would see them as we went to and from our KC-135s. Regulations prohibited us from taking any pictures, but they sure leave a lasting impression! The SR-71 is the only one of the Blackbirds I saw in flight. The A-12 had retired from service, and the YF-12A never went into production. I am on a mission to visit all remaining Blackbirds wherever they are on display.

I had the great pleasure/opportunity to meet each of the pilots that flew the first flights of the A-12 (Lou Schalk), YF-12A (Jim Eastham), and the SR-71 (Bob Gilliland) during the 40th Anniversary celebration of the first flight of the A-12 (April 26, 1962) at Blackbird Air Park in Palmdale, CA, in August of 2002. 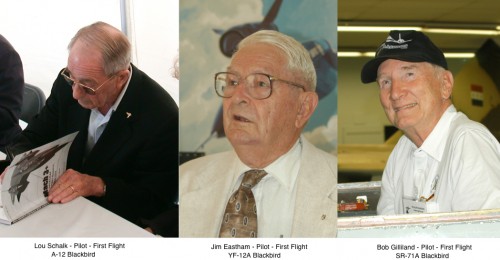