OK, no more excuses (at least no more new ones). Here is a brief summary of our 3rd day in Israel. After breakfast at the hotel, we met our Tour guide – Shooki – and were off to visit the sites in and around Jerusalem. 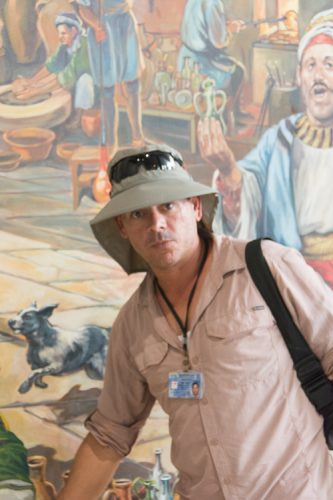 It is amazing the requirements that must be satisfied, and the tests – both oral and written – that must be passed to become a registered tour guide in Israel. A college degree sounds easier to do.

Our first stop this day was at the Mount of Olives. It provided a fabulous view overlooking the Old & New City of Jerusalem. One of the stops we made was at a Jewish cemetery on the hillside. There is much symbolism to the way the graves and their markers are done. The dead are here waiting to be resurrected and to enter through the Golden Gate into the Old City. 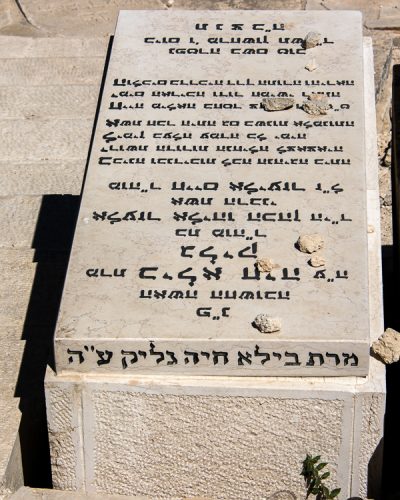 As I mentioned in a previous installment the stones on the graves are an indication that, “I was here to visit.” It’s a good thing Shooki told us this before my OCD kicked in and I started “straightening up the mess on the graves.” 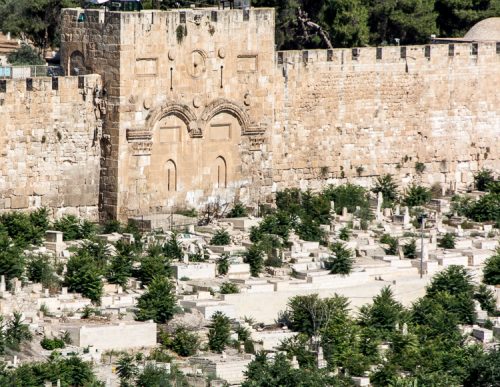 The photo above is a view from the Mount of Olives looking down on one side of the wall around the Old City. Under the double arches you can see the Closed off Golden Gate. This is the gate that will be opened when Jesus returns to earth. The graves in front of the gate are Muslim deceased. They have been purposely placed there to keep Jews from entering through the Golden Gate because only the “pure” can enter and if you travel through a cemetery you are not “pure.” 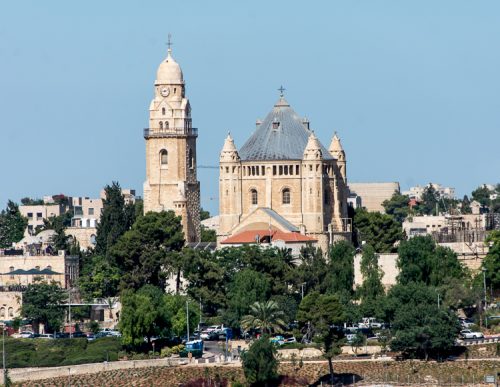 This is the Church of Saint Peter in Gallicantu. It is a Roman Catholic Church located on the eastern slope of Mount Zion. There were just a couple of churches/chapels/ synagogues/temples in Jerusalem (tongue-in-cheek).

Our next stop was at the Garden of Gethsemane with its “very old” Olive trees, and the Church of All Nations. 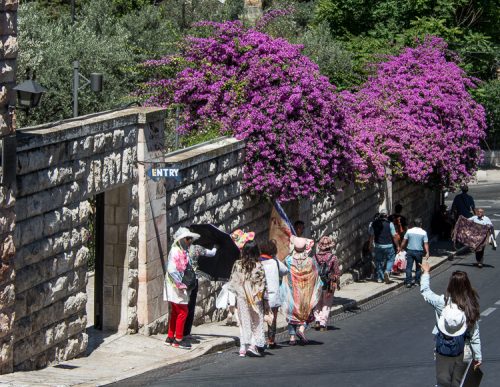 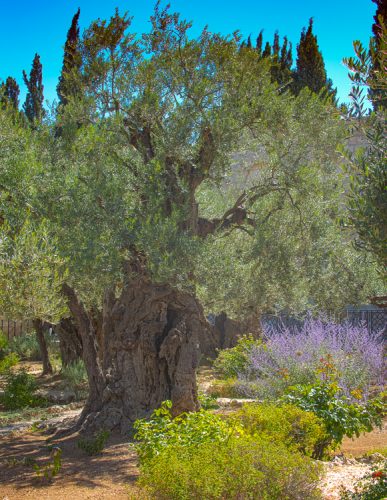 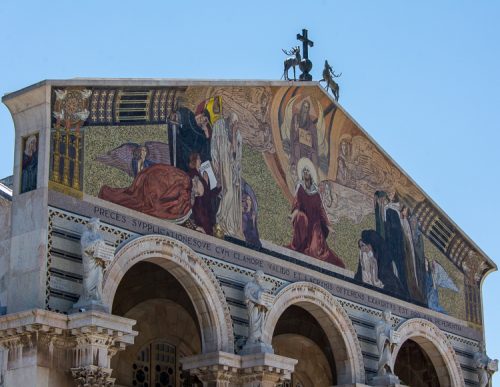 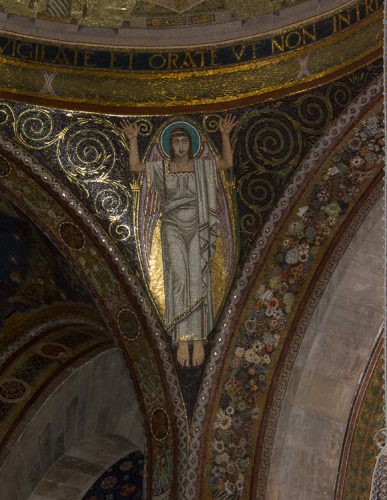 Here is another look at the wall around the Old City from in front of the Church of All Nations. 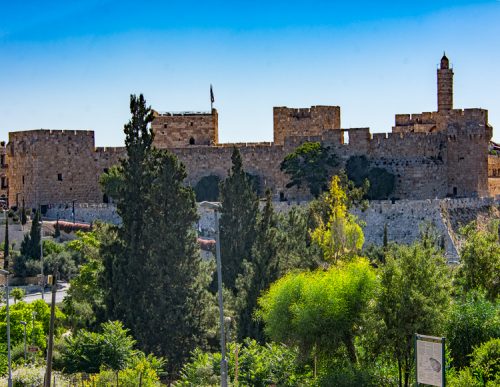 Shooki drove us to an entrance into the Old City, and while we waited for him to park his car and walk back to meet us, we relaxed in one of the “Oh so many” cafes.

is a 0.9 square kilometers (0.35 sq mi) walled area[2] within the modern city of Jerusalem.” There are four sections of the Old City – Jewish, Christian, Armenian, & Muslim. 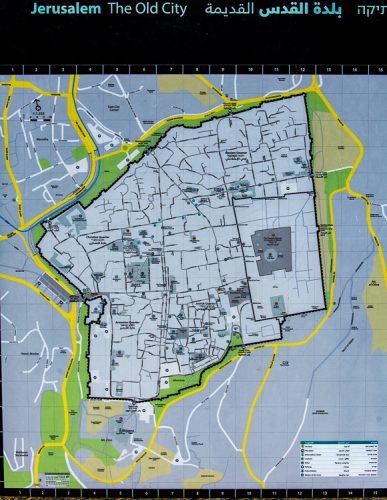 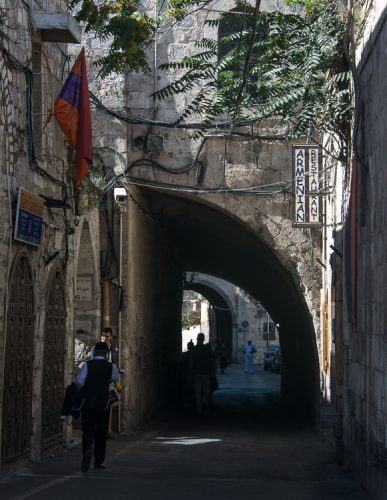 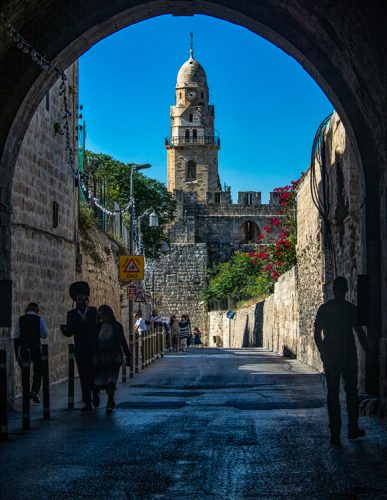 Lots of shopping opportunities throughout. Although we did not (could not) go into the Muslim Quarter. 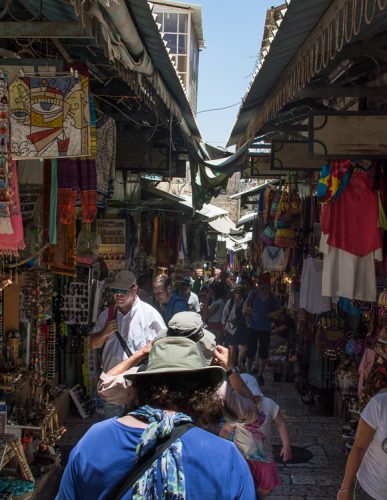 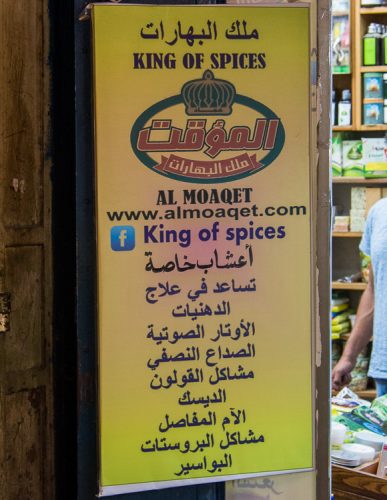 Here are your choices. Pick what you want and how much. All out in the open for your shopping pleasure. 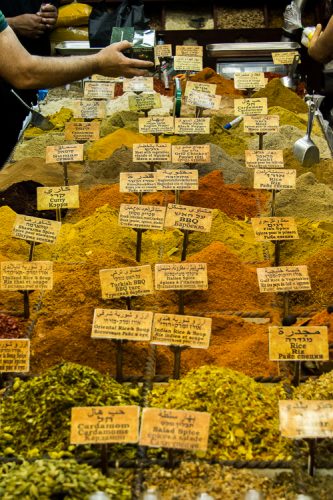 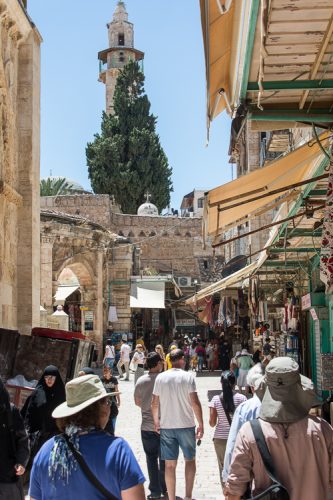 After a little souvenir shopping at Shooki’s favorite vendor, we walked around the corner to the Church of the Holy Sepulcher. So awesomely beautiful, ornate and yet very humbling. 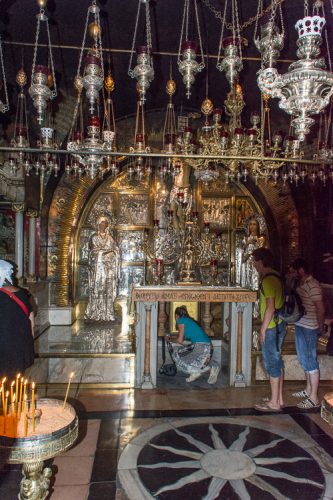 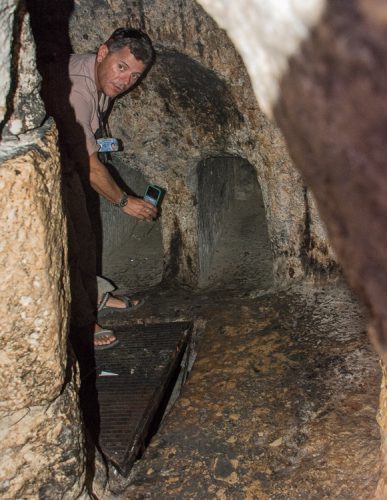 As we continued walking through more narrow “streets” (more like crowded aisles at Walmart but much darker and the floor was very uneven.) Shooki stopped us and said, “Wait here,” and he walked off down the street you see in the photo below. 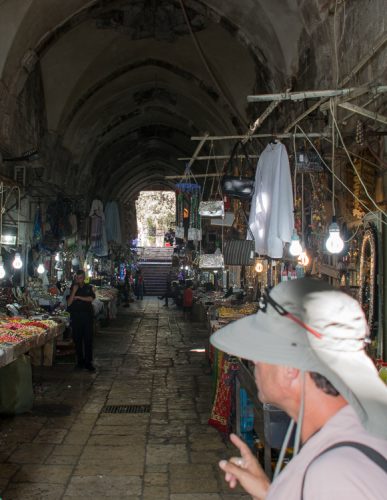 In a few moments he returned and said, “It’s OK for us to go down to the end of this street.” Curious!! He had talked with 3 armed (automatic weapons armed) Israeli policemen to get permission for us to come down. We were now as close to the Temple Mount – one of the most important religious sites in the world – as a non-Muslim can get. It is in the Muslim Quarter. No non-Muslim is allowed in the Muslim Quarter. Those figures in the shadows? They are armed Muslim guards there to keep out those who do not belong. 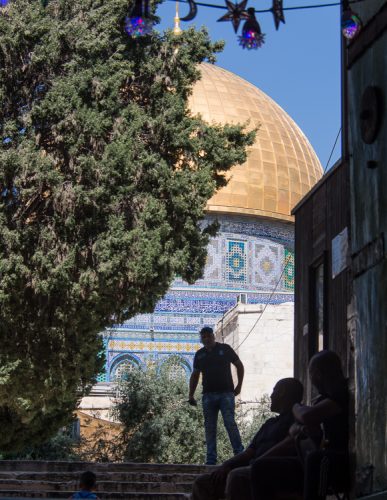 From here we walked to the Western Wall (The Wailing Wall) in the Jewish Quarter. This is where those of the Jewish faith come to pray. No photos or recordings were allowed so there are none to include here. 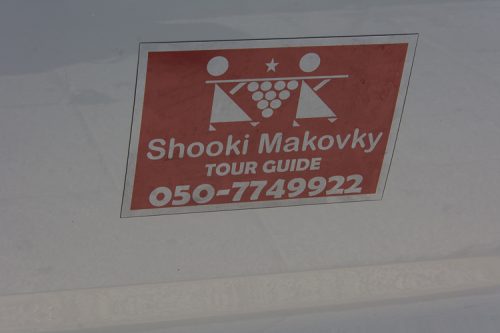 Thus endeth Day 3. If you ever have the opportunity to visit and tour Israel, we highly recommend Shooki Makovky as your tour guide. He was/is awesome and very knowledgable.

Until the Day 4 report, God Bless and have a great day. Thanks for stopping by.

This entry was posted in Uncategorized. Bookmark the permalink.